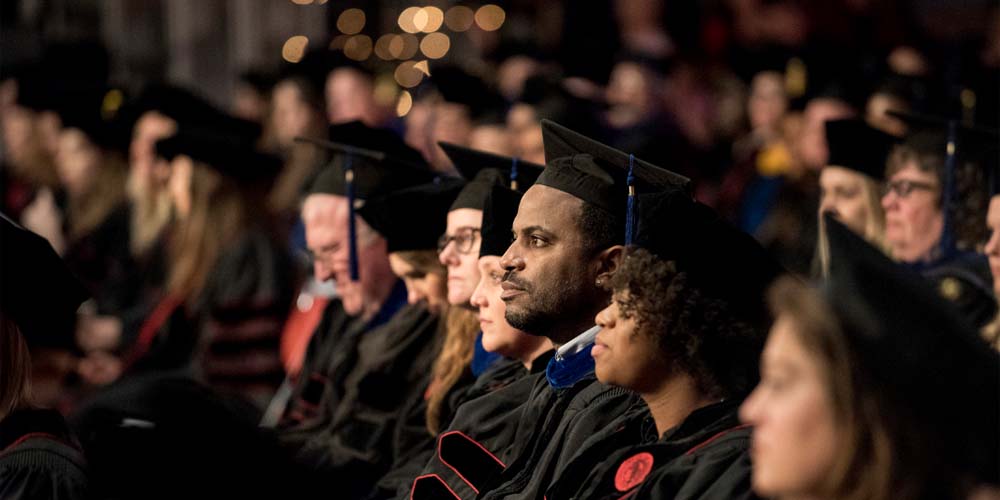 Programs may nominate graduate students for the following awards given at December and May commencement ceremonies. Those individuals who received their degrees in August must be nominated for consideration during the December commencement program.

Graduate Dean's Citations are awarded at each commencement to both masters and doctoral students recommended by their departments in recognition of superior accomplishment (e.g., publications, teaching excellence, and professional service) in their graduate studies beyond the achievement of a high grade point average.

To be eligible for a Graduate Dean’s Citation, a student must have significant accomplishments (e.g. publications, teaching excellence, and professional service) beyond the achievement of a high grade point average. The letter of nomination should include a description of the nominee’s achievements in the areas of scholarship, teaching, and service, as applicable. Each graduate program may recommend at least one prospective graduate, or up to 10 percent of its graduating class, for the Graduate Dean’s Citation.  Nominations may be submitted to the Vice Provost for Graduate Affairs for the December and May commencements.

This award is named in honor of Mrs. Alice Eaves Barns for her many years of outstanding service as a staff member of the Graduate School at the University of Louisville. This award recognizes a master's degree recipient who has displayed tenacity in the face of adversity, while attaining excellence in both the classroom and outside endeavors. The award nomination letter must reference the difficulties the student had to overcome while in graduate school, and must specify the student's achievements.

All students nominated for the Alice Eaves Barns award are automatically considered for a Graduate Dean's Citation.

This award is named in honor of Virginia "Jenny" Madden for her many years of service to the former Graduate School, the Staff Senate, and the University of Louisville community. This award recognizes a master's degree recipient who exhibits leadership through service to the recipient's program, college, discipline, the University as a whole, and/or the community. The nomination letter must reference the student's contributions and the impact of those contributions on the communities served.

All students nominated for the Virginia "Jenny" Madden award are automatically considered for a Graduate Dean's Citation.

The Guy Stevenson Award for Excellence in Graduate Studies honors a former Graduate Dean. The Stevenson Award recognizes an outstanding doctoral degree recipient who has demonstrated excellence in both scholarship and leadership within the discipline, and has made significant contributions to teaching and service, as applicable.  The recipient of this award will carry the graduate school banner at the commencement ceremonies, and thus must be available for the ceremonies to be considered.  This student will provide remarks of no more than five minutes during the Doctoral Hooding and Graduation ceremony and will also be a candidate for the student commencement speaker for the main commencement ceremony.  The nomination letter must include program/discipline-specific standards of excellence to help the multi-disciplinary committee evaluate the nominee and a statement that the student will attend both commencement ceremonies.

All students nominated for this award are automatically considered for a Graduate Dean's Citation and for the John Richard Binford Memorial Award.

The John Richard Binford Memorial Award honors a former chairman of the Department of Psychology. The award is presented to a doctoral degree recipient who excels in scholarship, and has contributed to other areas within the discipline such as leadership, teaching, or service, as applicable.  The nomination letter must include program/discipline-specific standards of excellence to help the multi-disciplinary committee evaluate the nominee.

All students nominated for this award are automatically considered for a Graduate Dean's Citation.

The John M. Houchens Prize honors a former Registrar of the University. The Houchens Prize is awarded to the doctoral student whose dissertation has potential for significant impact on a field. The nomination letter must provide a description in lay language, accessible to faculty from various disciplines, of the significance of the dissertation work, the impact within the discipline and the broader applications of the work. An electronic copy of the nominated dissertation must be submitted to the Graduate School.

All students nominated for the John M. Houchens prize are automatically considered for a Graduate Dean's Citation.

Nomination Procedures:
The department Chair or DGS must submit the nomination material via the Graduate School website.

Outstanding Mentor of a Doctoral Student

Outstanding Mentor of a Masters Student

Mentor awards honor faculty members who are deemed to excel in one-on-one mentoring of master or doctoral students to the completion of their degrees; in other words, these awards are given to faculty who successfully direct theses or dissertations, supervise students in labs, oversee students' internships or final professional papers.

Provost's Award for an Exemplary Director of Graduate Studies

This award honors those who have graduate or professional student advising and/or administrative duties (as DGS) designated on their annual workload assignments and who excel at the work of advising graduate students regarding program requirements, career prospects, funding possibilities, and so on.